Social security numbers should not be sent over a network in clear text. This program uses libpcap to read a packet dump file or capture live packets and scans through them for social security numbers. It is written to be as fast and accurate as possible. Use it to make sure applications aren’t sending a number in the clear.

ssncap can use on-the-fly public key / private key encryption / decryption to keep the information it captures protected. The data is encrypted before it is written to disk and is maintained in an encrypted state, even during post-capture analysis. The openssl library is required for this functionality. 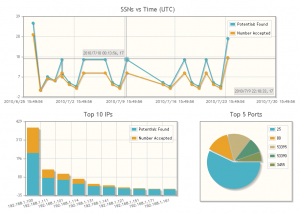 The report tool takes the output of ssncap and creates an HTML page interactive graphs, viewable in any JavaScript enabled browser. The information includes SSNs found over time, the top ten IPs with SSNs found, and the top five ports used for transfer. Mouse over points on the graphs to get more detailed information about when an incident occurred.

The reporting tool can also output into Comma Separated Values (CSV) format. These reports can then be imported into spread sheet programs, such as Excel, and manipulated and organized from there. This flexibility allows for new custom graphs to be made from the data.

Using ssncap’s threshold option and cycling options, scripts can easily be created to notify administrators when an incident occurs.

ssncap also has the ability to use syslog. Using syslog, ssncap can be integrated with other reporting tools such as OSSIM.